presents Short Works by Khalil Gibran, along with mp3's, eBooks and more...

New Thought Library is an online public library with free eBook and audio downloads.
Links to downloads for Short Works by Khalil Gibran are at the bottom of this web page

Blessings abound for the spiritually aware. Help connect like minded seekers with the Spiritual Resources produced by the NewThought.NET/work

Contents - The New Frontier (1925) - I Believe in You (to the Americans of Lebanese origin) - My Countrymen - Satan - You Have Your Lebanon and I Have My Lebanon (written after the first World War, in the 1920's) - Your Thought and Mine - Flute - History and the Nation

Your Thought and Mine

Your thought allows you to believe in the unequal contest of the strong against the weak, and in the tricking of the simple by the subtle ones. My thought creates in me the desire to till the earth with my hoe, and harvest the crops with my sickle, and build my home with stones and mortar, and weave my raiment with woolen and linen threads. Your thought urges you to marry wealth and notability. Mine commends self-reliance. Your thought advocates fame and show. Mine counsels me and implores me to cast aside notoriety and treat it like a grain of sand cast upon the shore of eternity. Your thought instills in your heart arrogance and superiority. Mine plants within me love for peace and the desire for independence. Your thought begets dreams of palaces with furniture of sandalwood studded with jewels, and beds made of twisted silk threads. My thought speaks softly in my ears, “Be clean in body and spirit even if you have nowhere to lay your head.” Your thought makes you aspire to titles and offices. Mine exhorts me to humble service.

Your thought is social science, a religious and political dictionary. Mine is simple axiom. Your thought speaks of the beautiful woman, the ugly, the virtuous, the prostitute, the intelligent, and the stupid. Mine sees in every woman a mother, a sister, or a daughter of every man. The subjects of your thought are thieves, criminals, and assassins. Mine declares that thieves are the creatures of monopoly, criminals are the offspring of tyrants, and assassins are akin to the slain. Your thought describes laws, courts, judges, punishments. Mine explains that when man makes a law, he either violates it or obeys it. If there is a basic law, we are all one before it. He who disdains the mean is himself mean. He who vaunts his scorn of the sinful vaunts his disdain of all humanity. Your thought concerns the skilled, the artist, the intellectual, the philosopher, the priest. Mine speaks of the loving and the affectionate, the sincere, the honest, the forthright, the kindly, and the martyr. Your thought advocates Judaism, Brahmanism, Buddhism, Christianity, and Islam. In my thought there is only one universal religion, whose varied paths are but the fingers of the loving hand of the Supreme Being. In your thought there are the rich, the poor, and the beggared. My thought holds that there are no riches but life; that we are all beggars, and no benefactor exists save life herself.

According to your thought, the greatness of nations lies in their politics, their parties, their conferences, their alliances and treaties. But mine proclaims that the importance of nations lies in work – work in the field, work in the vineyards, work with the loom, work in the tannery, work in the quarry, work in the timber yard, work in the office and in the press. Your thought holds that the glory of the nations is in their heroes. It sings the praises of Rameses, Alexander, Caesar, Hannibal, and Napoleon. But mine claims that the real heroes are Confucius, Lao-Tse, Socrates, Plato, Abi Taleb, El Gazali, Jalal Ed-din-el Roumy, Copernicus, and Pasteur. Your thought sees power in armies, cannons, battleships, submarines, aeroplanes, and poison gas. But mine asserts that power lies in reason, resolution, and truth. No matter how long the tyrant endures, he will be the loser at the end. Your thought differentiates between pragmatist and idealist, between the part and the whole, between the mystic and materialist. Mine realizes that life is one and its weights, measures and tables do not coincide with your weights, measures and tables. He whom you suppose an idealist may be a practical man.

Links to Additional Media for Short Works by Khalil Gibran such as audio and ebooks are located at the bottom of this web page.

Discover a rainbow of exciting New Thought Communities around the corner and around the globe.

A Powerful Collection of Spiritual Resources

We give you a powerful platform upon which to do God's Work learning and sharing New Thought:
DivineJournal.com, NewThoughtCommunity.com, NewThoughtTao.com and many more ...

Use DivineJournal.com to Research, read & write New Thought Texts which you can share through NewThoughtBook.info.

New Thought Day was declared by James Edgerton on August 23rd, 1915
During research while expanding the free New Thought Library, one of the ministers came across an interesting quote from early New Thought Alliance President James A. Edgerton: "'The truth, once announced, has the power not only to renew but to extend itself. New Thought is universal in its ideals and therefore should be universal in its appeal. Under the guidance of the spirit, it should grow in good works until it embraces many lands and eventually the whole world.' ~ , 1915." 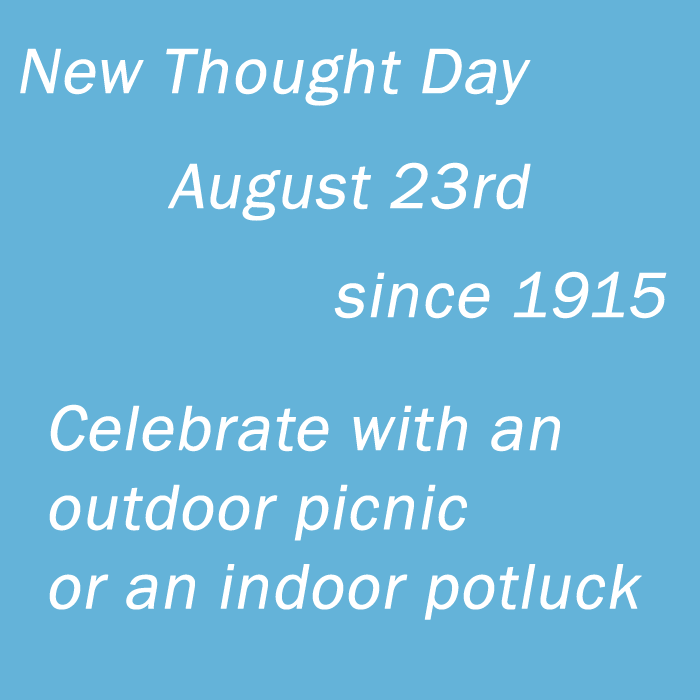 A growing collection of resources supported by a vast and expanding team of volunteers around the globe.

Listen to New Thought Radio broadcasts from the New Thought Streams PodCast Archive, along with a growing collection of New Thought Music directly from New Thought Artists around the world.

"'The truth, once announced, has the power not only to renew but to extend itself. New Thought is universal in its ideals and therefore should be universal in its appeal. Under the guidance of the spirit, it should grow in good works until it embraces many lands and eventually the whole world.' ~ James A. Edgerton, New Thought Day, August 23rd, 1915."

Be as water, as you are ...
The New Thought Tao

New Thought Solutions for New Thought Sharers and New Thought Communities. Empowerment programs that awaken us to the co-creative "Power of We." Grow and thrive sharing a rainbow of New Thought wisdom with the world.

Contribute to the Growth of the Library

To Build A Powerful Platform, begin with in.

In-tegrity entails Walking Our Talk, being an example by practicing what we teach!